Developing iPhone, iPad, iPod and Mac apps have been made possible using XCode IDE and using Objective-C, from a long time. Building iOS applications i.e. applications for iPhones and iPads using C# language on .NET platform can be made possible by making use of Xamarin.iOS. The only key entity in building iOS apps using Xcode is the use of Objective-C as the language to develop these iOS apps. Currently, C# developers who are interested in iOS development don't have to learn Objective-C to develop iOS apps. They are only required to know the basic concepts of Xamarin.iOS. Xamarin.iOS is a part of Xamarin. Xamarin is a cross-platform mobile application development software which aids in building iOS, Android and Windows apps using C# .NET platform. Xamarin provides Xamarin Studio and Xamarin plugin to Visual Studio to develop applications.

In order to deploy the developed iOS app on iOS devices or to submit it to the app store, you need an Apple Developer Account. Deploying and debugging an iOS app requires generating the development certificate and creating the provision profile for the particular device in which the app will be deployed to. Provisioning is nothing but configuring the app to run on devices. Here, while creating provision profile, you will set the devices that can run your iOS app. Here, you need to provide them with the generated .ipa file.

Always remember that we don't have an iOS simulator available for Windows. The iOS simulator works only on Mac OSX and therefore it is a mandate to have a Mac for testing and simulations of apps on a Mac screen using iOS simulator. Therefore, though we are developing iOS apps on Windows, we need a Mac for development. However Mac need not necessarily be placed beside you! You need a Mac on your network (i.e. Network to which your Windows machine is connected to) and you should able to connect to Xamarin Build Host present on the Mac by connecting to the Mac (Assuming that Xamarin development tools and iOS development tools are already installed on the Mac).

If you are planning to develop iOS apps using Xamarin.iOS in Windows environment, then, you have two choices. One is to use Xamarin plugin with Visual Studio and writing the C# programs in Visual Studio IDE to build your iOS apps using Xamarin library. If you are intended to develop Xamarin.iOS application using Visual Studio, then, see to it that you use Visual Studio 2010 or higher versions. Also see to it that you don't use Visual Studio Express edition. Another option is to have Xamarin Studio installed on Windows to develop Xamarin.iOS applications. However, both these options require a Xamarin.iOS Build Host. This Xamarin.iOS Build Host should be installed and setup on the Mac machine. In fact, this certifies that though we don't use the Mac directly to write the code in it, we need a Mac machine for iOS development using Xamarin. We cannot deploy iOS applications without Apple's certificates and the iOS simulator can only be run on Mac. This dependency has led to the fact that though we don't use Mac directly for coding, we still need to rely on Mac for iOS development. Therefore, in this scenario, Mac only acts as a build host.

Some of the key criteria to discuss before you connect your Windows machine enabled with Xamarin (i.e. Xamarin plug-in to Visual Studio or Xamarin Studio) to the Mac (i.e. Mac with Xamarin Build Host) are listed below: 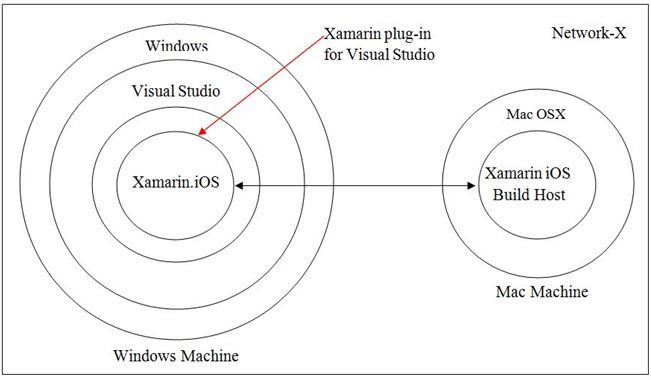 As shown in the preceding figure, both Windows machine and Mac machine should be in the same network. This is represented by placing both Windows and Mac inside Network-X as represented in the figure. 'X' can stand for any name of the network. 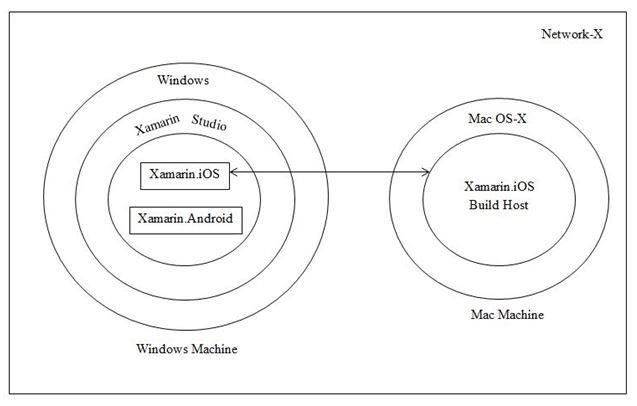 Preceding figure represents the communication between Xamarin.iOS present on Windows (Which is a part of Xamarin Studio) and Xamarin.iOS Build Host present on the Mac.

To build applications using Xamarin.iOS in Mac, you need to have Mac OS 10.8 or above. You need to have iOS SDK with XCode installed on Mac as a prerequisite. In order to build user interfaces, you have to select either Storyboard or XIB. Storyboard file will have .storyboard extension and XIB file will have .xib extension. Storyboard and XIB files are purely UI files where you can drag and drop different controls from the toolbox on top of the View Controller placed in the Storyboard or XIB. The toolbox itself contains different View Controllers. Latest version of iOS SDK and XCode IDE can be downloaded from Apple's App Store.
There are two ways to develop iOS apps using Xamarin.iOS in Mac machines. One method is to use Xamarin Studio directly, and another is to use Visual Studio with Xamarin plug-in passively as illustrated below. 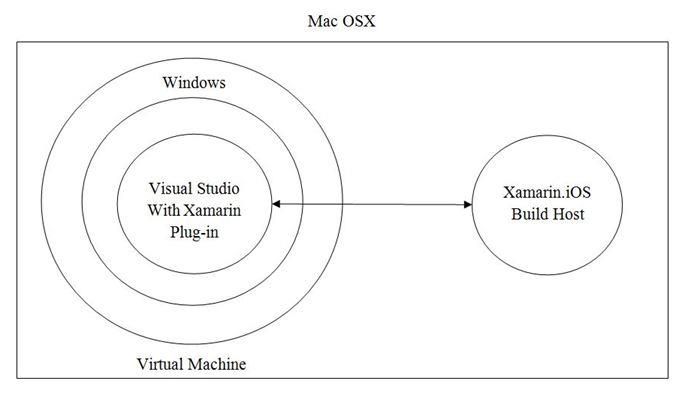 Figure 5: Using Windows virtually inside Mac to use Visual Studio with Xamarin plug-in.


There is something called as Mono which is an open source version of Microsoft .NET. Ahead of Time (AOT) compiler belongs to Mono runtime code generator. Open source Mono architecture comprises of class library and Common Language Runtime (CLR).

Managed binding to Apple's CocoaTouch library is available and it is known as CoCoaTouch.NET.

Remember that the Cocoa Touch Frameworks are specially meant for touch based user interfaces. So, it is built to aid in accomplishment of the same. While designing your iOS app it is important to follow the design guidelines provided by Apple. Each time when you build the Xamarin.iOS application in Xamarin Studio or Visual Studio with Xamarin plug-in, it will in turn call a tool named "mtouch". Basically, mtouch is the tool responsible for bundling your iOS application and it also helps the simulator to launch your iOS app as well as to deploy it to iOS mobile devices. mtouch includes a linker to managed code (Here managed code is C# code as it requires Microsoft .NET runtime for its execution). mtouch can aid in reducing the Xamarin.iOS application size by means of removing the unnecessary features i.e. removing class library features which are not used by the current Xamarin.iOS application. 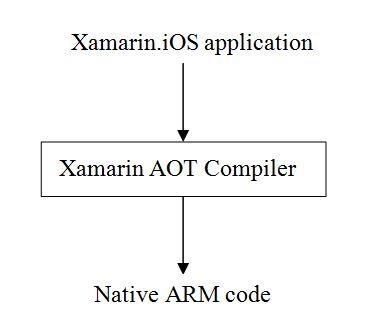 Assembly contain CIL/IL code. Therefore all Dynamic Link Libraries (DLLs) and Executables (EXEs) are examples for assembly files. CIL or IL in .NET is equivalent to Java Byte codes. CIL is also called Intermediate Language (IL) or Microsoft Intermediate Language (MSIL). CIL is human readable code. Consider that you have two same applications, one written completely using C# and another using Visual Basic. As both C# and VB are .NET languages, if you compile both codes using C# and VB compilers respectively, then, you will get IL codes generated for both. If you check the IL codes of both applications that are written in different languages, you will find that both these codes look similar as both the applications point out to the same logic although written in different languages.

Finally, when you build a Xamarin.iOS application, you will get the .ipa extension file, which can be installed on iOS devices (iPhone/iPad/iPod). This .ipa file is a compressed file which contains binary for ARM architecture. Here, machine code means code which is designed to run on a particular architecture. Ex: ARM machine code runs on ARM architecture based processors, x86 machine code runs on x86 based processors. This machine code itself is sometimes called by the name "binary", which actually means the code contains a stream of 0's and 1's which can only be understood by machines (hence, the name - "machine code") and are in a non-readable format for humans. We can also call ARM machine code as native ARM code because native code implies the code compiled to run specifically on a particular platform. Native ARM code means code compiled specifically to run on ARM architecture machines. 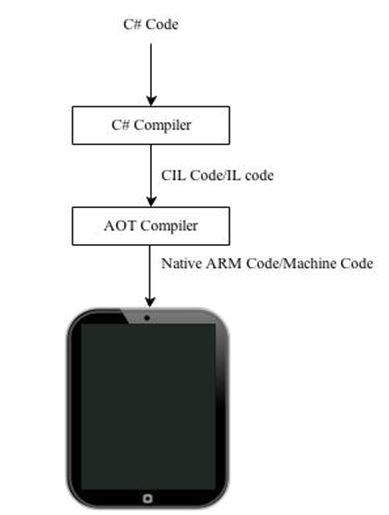 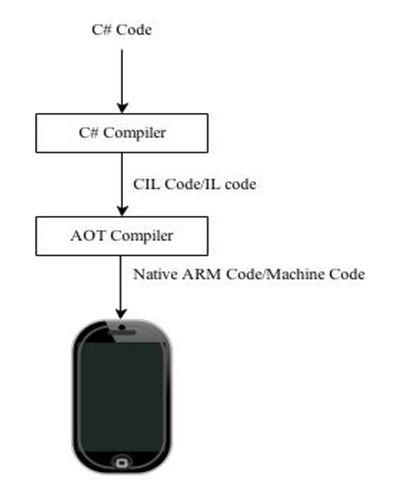 In this article we first try to create proper Xamarin.Android development environment by installing all the required components on our machine and then build our first Xamarin.Android application in C# language using Visual Studio.

Descriptive and elaborated contents, thanks for sharing