What is Test-Driven development

With TDD, we use unit tests which describe the desired behavior as per the specification for our functionality to help design our code. Generally we are used to write the Tests after we have finished coding, but this is a different concept where in we write the unit tests before we start implementing the code.

How to perform Test-Driven development

1.First we will decide that we need to add a new method or a feature to our application.
2. Then we will write the test that will validate the behavior of the new feature when we complete writing it.
3. Run the test to get wrong behavior
4. Write the code that implements the new feature.
5. Run the test again and correct the code until we get the correct behavior of our implementation.
6. Update the code if required such as by reorganizing the statements, renaming the variables, modifying the statements and so on.
7. Run the test to confirm that your changes have not changed the behavior of your additions.
8. Repeat the above steps, for every new functionality you add.

Test-Driven development Example
Let us write a functionality to divide a number –a by another number - b, only if the other number b is positive.

1. Let us add a stub method to the Test class as shown below:

To do this we will create 3 test methods for each of the behaviors that we want to see. To create Unit Tests for our application we can add a Unit Test project to our solution as shown below 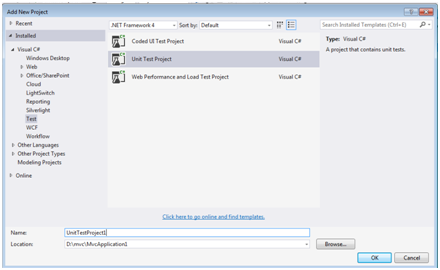 We will write the Tests that follow the arrange/act/assert pattern to create, test and validate one aspect of the overall behavior that is each Unit Test will be responsible for testing one aspect of the functionality. 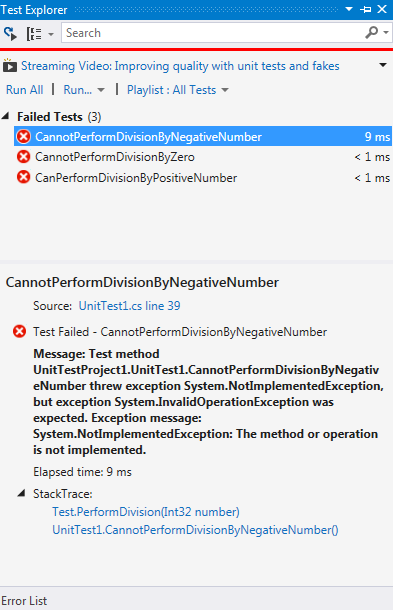 Now let us add initial implementation of the PerformDivision method to the Test class.

Running the UnitTests again, We see that, Two of the three unit tests have passed.
CannotPerformDivisionByNegativeNumber method fails because we did not add any checks to make sure that we cannot perform division with a negative number. We have to modify our implementation to put this logic in code.

As We can see that we have expressed the error condition in such a way as to satisfy the unit test we wrote before we started coding — that is, we throw an InvalidOperationException when a division is performed with a Negative number .

Each time we change the implementation of the PerformDivision method, we run our unit tests again to make sure that the changes did not break our code.
? We have implemented our new feature such that it passes all of the unit tests.
? We have to make sure that our tests does test all aspects of the behavior or feature we are implementing. If any of the aspects of the expected behavior is failing, then we need to add more tests and repeat the cycle — and we keep repeating it until we are confident that we have a set of tests and an implementation that passes all the tests.