There are many tools for programmers for writing program such as algorithms, flowcharts, pseudocodes, data dictionary, decision table, data flow diagrams etc. They are effective tools for knowledge of programming tools

Any work that we do in our daily lives that work to solve the Problem. Problem can say and everyone has a certain order and under the certain order, we have a variety of Steps Use. Suppose for example that we have someone to Phone. It is also a problem because we have to do something. Phone us are now following tasks:

Suppose for example that we have someone to Phone. It is also a problem because we have to do something. Phone us are now following tasks:

Check for this, first we will Phone, the Phone is turned on or not. The Dial Tone coming or not.

If the Dial Tone is coming, Phone Number Dial the person is to us, so we want to talk.

After Phone Number Dial Phone us at Target person will have to wait to Bell.
Phone Attend the Bell's and Target person, then it will be.
Change the order of these Steps, we cannot, nor can we leave at any Step. Here is a summary of this example:

To obtain a definite and reasonable solution to any problem, we varied the problem Steps to define a group, which consists in a certain order. The Steps Follow the simple language of the group and its streamlined writing in order to be taken, which we receive written Description, as it is called Algorithm.

So, we have C = A + B. To accomplish this task, or to solve the Problem in order to follow us as follows:


We can see that we have to add two numbers above are the various Steps to follow in the order in which depicts. If we do all of the above Steps to Follow When Exactly in the same order in which they were written above, we certainly receive the sum of two numbers. Since writing the above Description of the two numbers add to a Well Defined Working Algorithm.

An Algorithm to Solve the Problem of the way Description is written. Flowchart to Solve a Problem in exactly the same way is a featured Description. If we add the two numbers Flowchart Create a wish to Flowchart something we will be as follows
Flowchart of Addition of two Numbers. 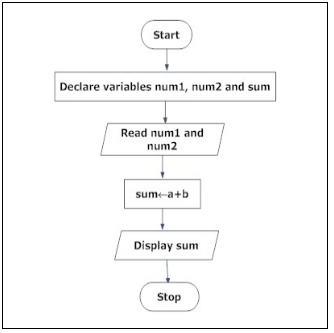