The Visual Studio designer consists of several design tools that aid in the designing of Window form based applications, WPF applications, Web applications, Classes, Database schemes and mappings between database and classes. However, in case of Visual Studio 11, Microsoft has announced that it would not support the development of desktop applications and users would only be able to develop Metro Style applications.

The code editor of Visual Studio 2012 is where the main coding is done for the application being developed. The code editor would include IntelliSense which facilitates automatic code completion and suggestions for variable, loops, methods, functions and other queries. This IntelliSense provides suggestion not only for the included front end languages but also for Java Script, XML and CSS. Some common features of a Visual Studio Code Editor are collapsing code blocks, setting bookmarks, incremental and regex search, multi item clipboard and task list. Another interesting and important feature that is included in Visual Studio 2012 too is the background compilation. Whenever a developer types some code in the code editor, Microsoft Visual Studio starts compiling it in the background so that it can point out the syntax and compilation errors. The errors are then displayed with a green underline.

Visual Studio 2012 debugger helps in debugging both at source level and machine level. Usually it is launched when a running application crashes. To trace the errors users can set breakpoints and watches. The debugger provides functions like step in, step over and step out for debugging the code blocks according to the need of the user. An interesting feature supported by Microsoft Visual Studio 2012 is Edit and Continue, which facilitates editing while the debugging is going on. This feature was not present in the earlier versions of Visual Studio.

The main focus of metro style applications is on the content. The whole screen in these applications is dedicated for the user content without any diversion of the user focus. They are specially customized according to user needs, devices they are running on, touch interactions and user interfaces. They support multi touching features that means that the applications can respond to 2 or more points of contact on the touch pad of the device.

In the new Windows 8 the desktop does not looks like the earlier one with icons. Instead the desktop is arranged with tiles. The .exe files of metro style apps are live extensions called tiles on the desktop instead of the old icons. Shown below is a view of Metro Style Desktop on Windows 8: 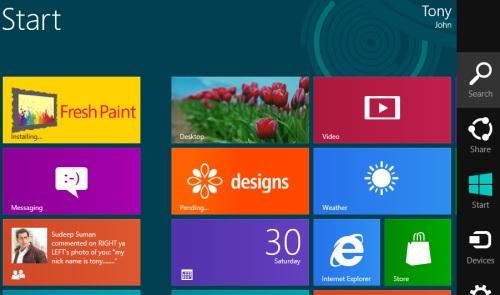 Visual Studio 11 is based on the new .NET Framework 4.5. The .NET Framework 4.5 provides easier and convenient ways to write codes for the new Metro style apps. It is much faster and hence the applications run at a faster speed. The asp.net start up is also very fast. The .NET framework 4.5 provides an excellent support to asynchronous program development.
It provides a modern and easy access to the data in databases. It also supports the SQL server features, entity framework and web sockets to access data.

With the latest changes seen in the .NET Framework 4.5 the WPF 4.5(Windows Presentation Foundation 4.5) also evidences considerable improvements and changes. Some of them are listed here:
1. The first major change seen is the Ribbon Control. This control enables a ribbon user interface which consists of an application menu, toolbar for quick access and tabs.
2. For supporting synchronous and asynchronous data validation a new Interface is implemented.
3. The performance is improved considerably which is evident while displaying huge sets of data that is grouped.
4. Another major change that is observed in WPF 4.5 is improvement in item scaling. The time taken to load around 200000 items is just 2.3 seconds.

Other code window and debugging features in Visual Studio 11 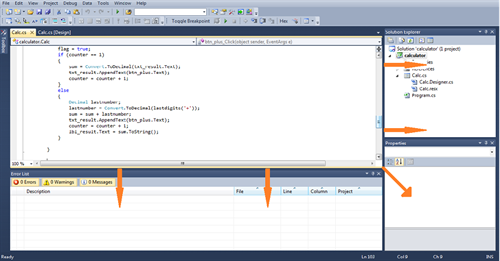 Have you tried these stuff? some features like Code window resize and evil code monkey doesn't work on 2012 RC. How to enable them?

Edit and Continue was supported in previous editions.
In VS2012 is still not supported for 64-bit applications.